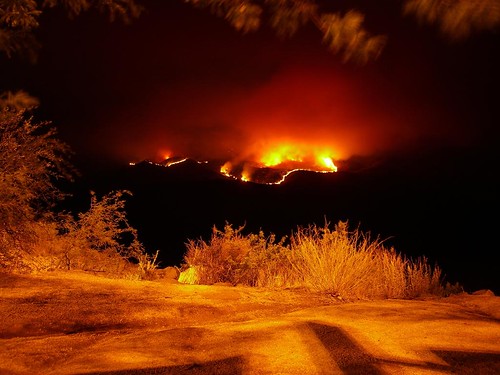 The underground coal fire that creates what is called “Burning Mountain” (Mount Wingen) near Wingen, New South Wales, Australia was probably started by lightning or spontaneous combustion. At least, that’s the assumption—no one knows for sure because it has been going strong for at least 6,000 years.

Acientists believe it may be the oldest known continuously burning coal fire. The blaze moves at a rate of about 1 meter (3.3 ft) each year due south. That may not sound like much, but given its age, simple math tells us that the coal fire has moved at least 6 kilometers (3.7 mi) since it started.

At this rate, the fire should reach the outskirts of Sydney Australia, a distance of about 280 kilometers (173 mi), in another 255,000 years or so.