Though spontaneous fire seems like it would be a rare natural phenomenon, they are actually quite common both above and below the ground. Usually fueled by underground coal, gas, or oil seeping to the surface, some of these “eternal flames” have been burning continuously for centuries — and yet remain oddly obscure. 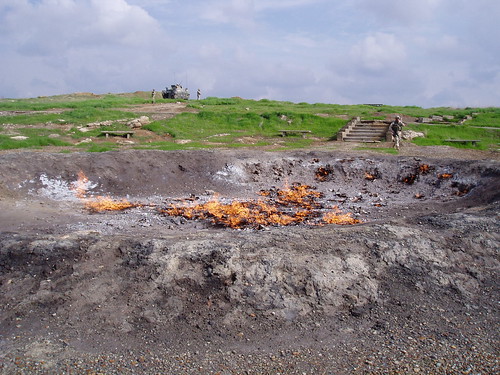 Located at the center of an enormous oil field in Iraq is the eternal fire of Baba Gurgur. It is created by natural gas which percolates up through the rocks. Local legend claims that the fires were used by shepherds to warm their sheep in the cold months of the year.

Legend also has it that pregnant women would visit the flames if they were hoping for a boy. This natural fire formation may be the source of the Biblical story of the “fiery furnace” into which King Nebuchadnezzar threw three Jews for refusing to worship a golden idol.

For thousands of years, native people have used the natural asphalt at Baba Gurgur for their homes, their roads, and other things. The flames are visible for miles, and visitors to Kirkuk, Iraq can see them from the city. The flames also emit deadly hydrogen sulfide gas, so visitors are told by warning signs to stay upwind of the smoke.