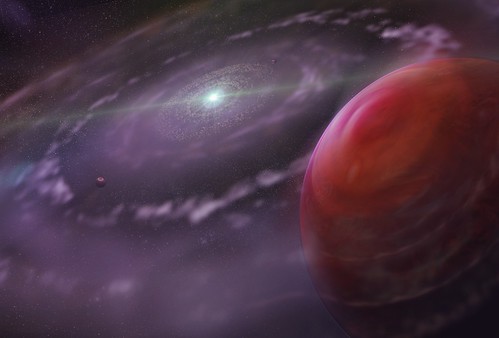 As our stellar encyclopedia grows, we’re finding that many stars host multi-planetary systems. There are 466 such specimens, though almost half of them contain only two planets. Younger systems are much easier to spot because they still retain residual heat from their formation, and one such example is HR 8799.

The large, young star hosts four hulking gas giants that make even Jupiter look puny. Luckily, the planets’ distance from the star ensures that their light signature (visible in infrared) is readily apparent and not overwhelmed by the light from their parent.

And while the smallest member of this alien solar system makes Jupiter look like a preschooler, the largest is up to 35 times as massive as the Jovian giant.

Its size, age, and the fact that the system is only 130 light-years from Earth made HR 8799 relatively easy to spot. And seeing such giant gas planets at such distance from the solar center opens up new theories about how planets form due to the observed differences between this system and our own.