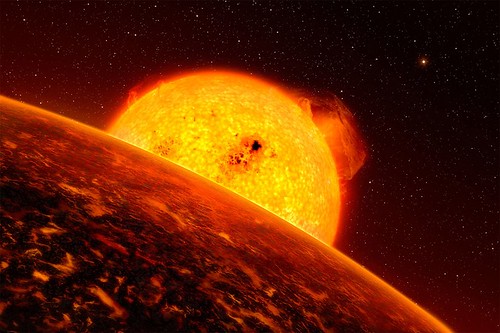 Kepler 78b is an anomaly: It shouldn’t exist. Like Jupiter’s moon Io, Kepler 78b is a hellish planet bedecked in lava and fire. Yet its odd size, combined with its unusually tight orbit around its star, have caused a slight ruckus in the scientific community.

Astronomers don’t really know how a planet of this size ended up so close to its parent star, since there are no planet-formation theories consistent with the reality. And when we say close, we mean within snuggling range—Kepler 78b is a mere 1.6 million kilometers (1 million mi) away from its sun, making a full year on Kepler 78b just under nine hours long.

The planet is only 1.2 times as large as Earth and not even twice as massive, making it one of the most Earth-like planets ever found. Its location ensures a thorough roasting, and temperatures on the surface can reach 2,400 degrees Celsius (4,300 °F).

Data also suggests that the star was much larger in its youth, which places Kepler 78b’s current orbit comfortably within its former stellar radius.

Therefore the planet obviously could not have formed where it now sits, so new theories must be put forth. All that’s known for sure is that 78b will soon be devoured by its star as it spirals ever closer to its inevitable destruction.