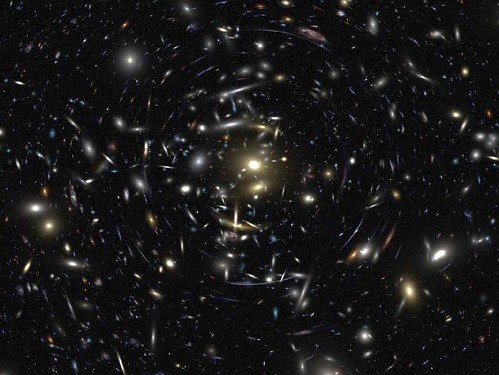 The history of our universe is hidden from us not only by unimaginable spans of time and distance, but also by seemingly endless amounts of matter. Gas and dust upend the beams of light that serve as our only glimpses into the formative universe.

But sometimes, immensity plays in our favor, and astronomers can effectively see regions of space that are far behind massive objects because photons traveling past are warped and magnified. This is called gravitational lensing, and it’s allowing NASA to see the dimmest, smallest, oldest galaxies ever.

Using the galaxy cluster Abell 2744 as a lens, astronomers have recently imaged thousands of fetal galaxies that, at 12 billion years old, are almost as old as the universe itself.

Though Abell 2744 is only 3.5 billion light-years away, the magnifying effect is so great that it’s supplied us with the deepest image of the universe ever: the First Frontier Field.

Since the lens increases the apparent size of distant objects by up to 20 times, we’re able to see seriously tiny and faint objects that are situated almost at the very end of space itself.