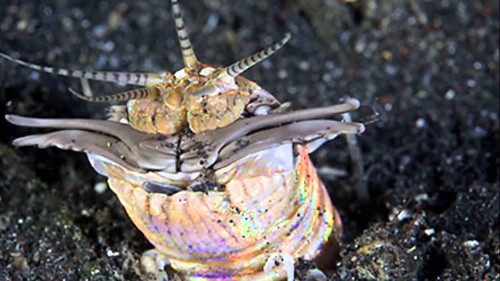 There’s nothing about the bobbit worm that isn’t grotesque or morbid. Even its name came from a court case in 1993, involving a woman named Lorena Bobbitt, a knife, and . . . something else that looks like a worm.

Equal parts Tremors Graboid and unholy hellspawn, the bobbit worm can grow up to three meters long (10 ft). It burrows into the sea bed, leaving a small portion of itself above the surface. When a fish wanders by, the worm lunges out, snags the fish with its massive pincers, and drags it underground.

Most specimens haven’t been found in the ocean—but accidentally stowed away in saltwater aquariums. They hitchhike into the aquarium in rocks and gravel taken from the ocean, then slowly grow under the radar.

In 2009, a giant bobbit worm was found in Blue Reef Aquarium in England. It was noticed when the aquarium workers took apart the tank to figure out why all their fish were disappearing.