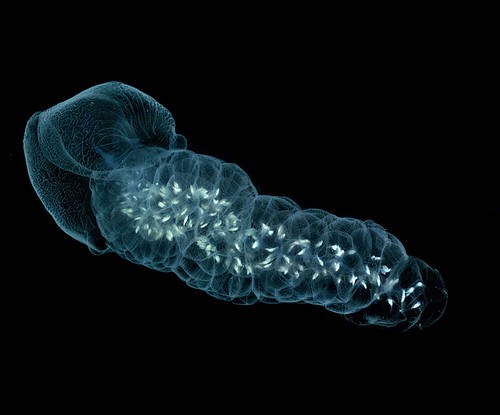 Visually, this thing doesn’t look like much, but you need a sense of scale to really appreciate the giant siphonophore; they live in the deep sea and can reach lengths of more than 40 meters (130 ft). That’s the height of a 13-story building and longer than a blue whale, the world’s largest vertebrate.

But the giant siphonophore isn’t really a single animal, per se; it’s actually a colony of millions of creatures called zooids.

Each cluster of zooids has a specialized purpose: Some are responsible for eating, others digest the food, and others have the task of defending the colony.

When they all work together, the colony functions like a single organism. It’s like a country or (perhaps more accurately) a stack of midgets in an overcoat.

And because siphonophores live so deep (about a kilometer down, or half a mile), they’re constantly under a ridiculous amount of pressure—half a ton for every square centimeter of surface area. As a result, they’re difficult to study. When brought too close to the surface, they pop like a balloon because of the reduced pressure.