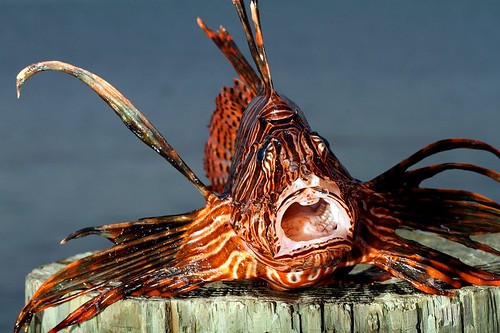 There are 10 species of lionfish, and it goes without saying that they’re one of the most recognizable types of fish in the world. Savagely beautiful and incredibly dangerous, all 10 species are native to the Indian Ocean and southern Pacific, although two species were introduced to the East Coast of North America in the ’90s.

This is turning out to be a problem because they breed like underwater rabbits and have no natural predators.In fact, the population explosion has gotten so bad that researchers in Honduras are actually trying to train sharks to eat lionfish.

Normally, sharks won’t even go near the things. Right now, the only real danger to these predators is, ironically, themselves: In the absence of food, lionfish will eat each other.