If you were a movie producer and somebody pitched a film about a tentacled alien that could shape-shift, become invisible, and shoot a blinding cloud of chemicals at its enemies, you’d just sigh and say “No, that’s an octopus.” We take it for granted that there are a few million creatures like that floating around; at some point, science jumped into the back seat of creation and let nightmarish curiosity drive for awhile. But even among the world’s most bizarre creatures, there are extremes. 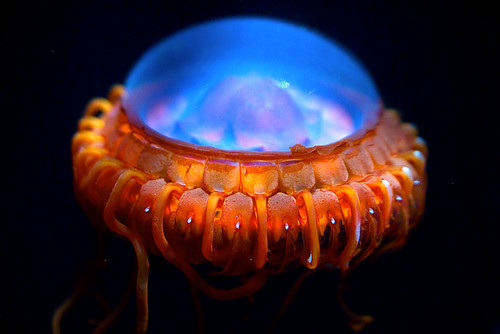 Atolla jellyfish are pretty common. They’ve been found in every ocean of the world, but they’re not something you’re likely to come across at the beach because they usually live over 700 meters (2,200 ft) below the surface.

Like many deep-sea creatures, they’re bioluminescent (they light up like fireflies). But atollas don’t use their lights to capture prey like anglerfish do—they use them to escape. If an atolla is caught by a predator, it emits a frenzy of bright pulses, like a strobe light.

The light show attracts even bigger fish, which will go for the atolla’s attacker, giving it a chance to get away. The atolla also has a single, elongated tentacle, which it uses to capture prey. They grab their victim with the end of the tentacle and drag the helpless creature through the water, jerking it back and forth until it’s too tired to fight back—like a fisherman reeling in a big fish.