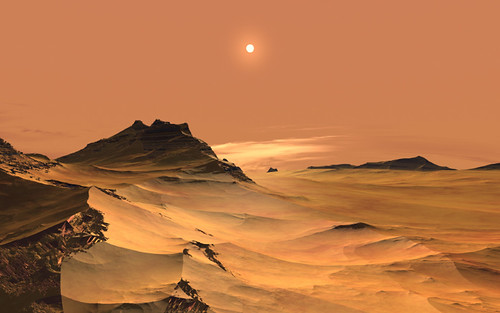 In 1820, German mathematician Carl Friedrich Gauss sought to incorporate the work of Pythagoras in his quest to communicate with alien life on Mars. Gauss suggested clearing a large patch of Siberia and planting wheat for miles in a shape that geometrically illustrates the Pythagorean Theorem.

By harvest season, the bright yellow crop-filled areas would contrast with the forest’s darker coloring. Gauss believed that Martian observers could spot this gigantic triangle on Earth with a small telescope.

Other odd ideas were also popular during the 19th century. Astronomer Joseph Littrow suggested digging trenches measuring 30 kilometers (20 mi) in length and shaped in various geometric patterns across the Sahara.

We’d then fill them with kerosene and light them up. A Frenchman, Charles Cros, suggested building a huge mirror that could focus sunlight and burn messages into the very surface of Mars.