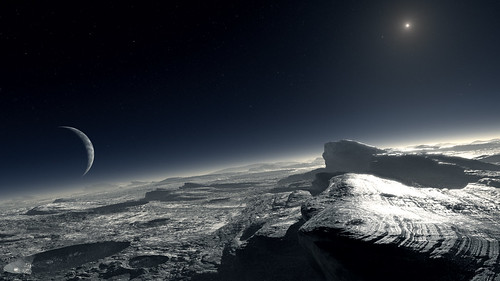 In 2011, astrophysicists Ed Turner and Avi Loeb were discussing the Fukushima Nuclear Plant incident, which gave the public knowledge of Tokyo’s electricity usage. The bright lights of the city gave way to a dimmer phase after the disaster and the subsequent power cutbacks.

Turner and Loeb postulated that such drastic changes could be easily seen by observers 30 times farther out than Pluto. The proposed Large Synoptic Survey Telescope will photograph the entire night sky every few days or so. Changes in the lights of heavenly bodies will be easily noted.

The men suggested that, in the decades to come, it may be possible to see if Pluto’s light is merely due to light reflected from the Sun or if it is generated by artificial sources on Pluto’s surface.

On that note, a few theories have been postulated that life might be possible inside Pluto. Scientists have suggested the presence of plate tectonics in Pluto, which could mean that it has a warm, underground ocean—a possible habitat for life.

The planet’s former moon Charon may also have such features. Once NASA’s Horizons probe takes the first high-resolution images of Pluto and Charon in 2015, we may finally have answers.