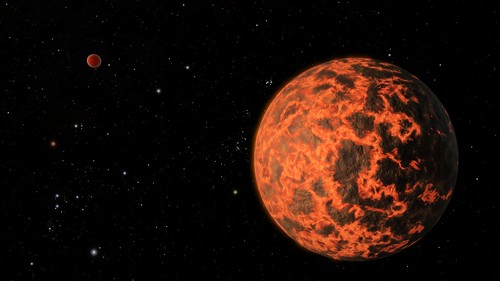 Gliese 436 b is a Neptune-sized extrasolar planet orbiting the red dwarf star Gliese 436. It was among the smallest known transiting planets in mass and radius until the much smaller Kepler discoveries started coming in 2010.

Gliese 436 b can be the cousin of the Gliese 581 c. An equally murderous planet, Gliese supports one which is completely made of ice, at 439° Celsius. Simply put, Gliese 436 b is a burning cube of ice. The sole reason the ice remains solidified is that there is a high quantity of water in the planet.

The gravitational force pulls all of it into the core, keeping the water molecules packed so densely that they cannot evaporate.

Related: The 5 Scariest Planets You don’t Want Ever to Visit