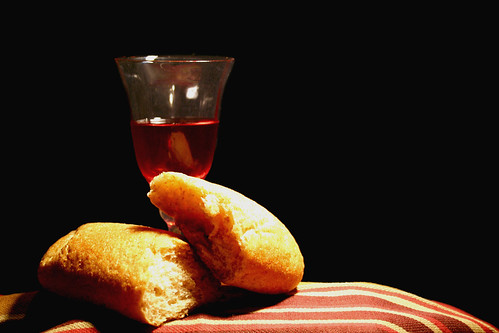 It wasn’t publicized at the time, but Apollo 11 astronaut Buzz Aldrin took Communion on the Moon. Aldrin was an elder at his Presbyterian church at that time. He asked his pastor how he might mark the occasion of the first humans landing on the Moon.

The pastor prepared a Communion wafer and a small vial of wine, and Aldrin brought those with him into space. A few minutes after landing on the Moon, he made the following public announcement on the radio: “This is the LM pilot. I’d like to take this opportunity to ask every person listening in, whoever and wherever they may be, to pause for a moment and contemplate the events of the past few hours and to give thanks in his or her own way.”

Then Aldrin halted radio communication with Earth. He removed the bread from its plastic package, and he poured the wine from another plastic package into a small chalice that his church had given him.

He read a verse from the gospel of John (which he’d written on a notecard), ate the bread, and drank the wine.Aldrin wanted to broadcast the verse on the radio, but NASA asked him to refrain because of an earlier incident. When Apollo 8 astronauts had read from Genesis while orbiting the Moon on Christmas, the agency had faced a lawsuit. NASA didn’t, however, try to keep Aldrin’s Communion a secret; it’s noted in their official history. Aldrin also described it in his book Return to Earth.