Twelve astronauts landed on the Moon between 1969 and 1972 on Apollo missions 11 through 17. They brought with them plenty of equipment essential for their survival, but they also took some rather less-expected items. 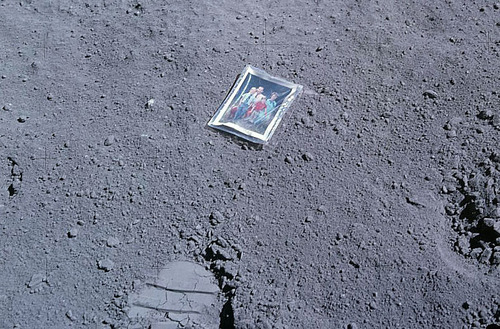 Astronauts took some photos to the Moon, but the most famous has to be the one that Apollo 16 astronaut Charles Duke left on the surface. It shows Duke, his wife Dorothy, and their two sons, Charles and Thomas, sitting on a bench.

The back of the photo had the message:“This is the family of Astronaut Duke from Planet Earth. Landed on the Moon, April 1972.”

Below that message were the signatures of his wife and kids. The photo was shrink-wrapped in clear plastic, and shortly after placing it on the surface, Duke took a photo of it lying there (using one of the Hasselblad cameras the astronauts had on the Moon). Photographic prints left out in sunlight get ruined quickly, even on Earth, so it probably didn’t last long.