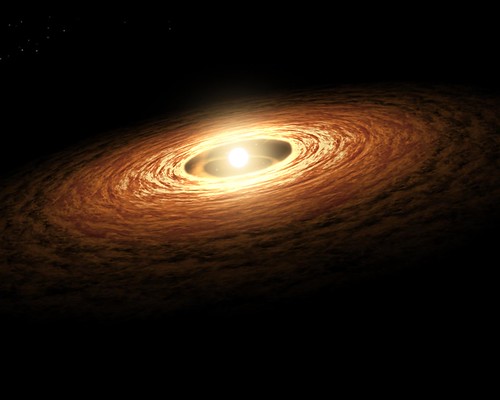 A lot of questions have recently been answered about one of the oldest mysteries in astronomy—the eclipse of the star Epsilon Aurigae. Every 27 years, it dims for around 18 months. Since the 1820s, scientists have offered all sorts of suggestions, from black holes to huge stars.

Observations from the most recent eclipse, which began in 2009, suggest a binary system made of a dying star and another star that’s surrounded by a giant disk of material. Yet despite figuring out what’s there, it leaves the question of why.

The disk in question is made of gravel-sized particles. It’s the sort of debris field normally found in much younger star systems. The recent observations were crowdsourced as part of a citizen science project. There may be enough information in them to figure it out—or we may have to wait another few decades.