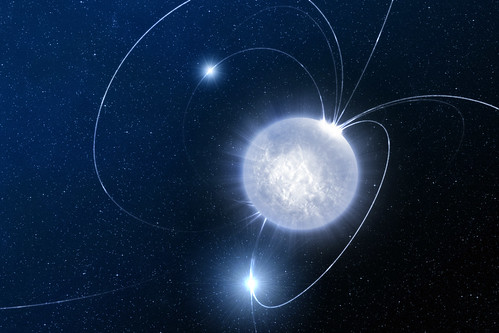 Magnetars are a type of neutron star with a magnetic field quadrillions of times stronger than Earth’s. They’re the most powerful magnets in the universe. They were only theorized in the 1990s and they’re filled with properties that we still haven’t figured out.

A common feature of magnetars is the “glitch,” an event that causes a sudden increase in spin. Scientists have seen hundreds of glitches and have a plausible model for how they occur based on the frictionless neutron superfluid believed to be at their center.

On April 28, 2012, astronomers witnessed the first sudden slowdown from a magnetar, 1E 2259+586. It’s been dubbed the anti-glitch. It was wholly unexpected and doesn’t fit into any current theories.There are clues that may help. A week before its anti-glitch, the magnetar unleashed an intense burst of X-rays that is most likely connected to the slowdown.

On top of that, all neutron stars are slowing in their spin over time at a constant rate. This is known as spin-down, and 1E 2259+586 has been slowing more rapidly since the anti-glitch.

One mystery that was recently solved was the existence of CXOU J164710.2-455216 in the cluster Westerlund 1. The supernova it came from was around 40 times the mass of the Sun, so it shouldn’t have left anything but a black hole. The leading theory was that there had been a binary system which interfered with the normal mechanisms. Scientists found a “runaway” star nearby that looked exactly as predicted.