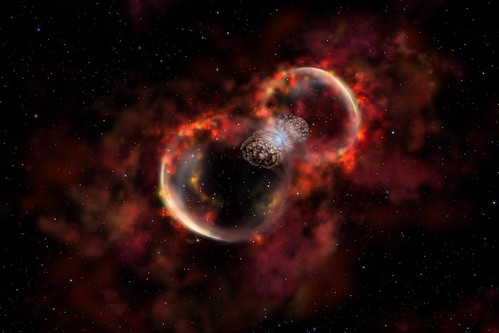 In 1838, the glow of Eta Carinae increased until it became the second brightest star in Earth’s sky. It stayed that way for 10 years before dimming and falling outside the top 100. This event was called the Great Eruption.

It was caused by Eta Carinae losing 14 percent of its mass—equivalent to 10 of our Suns. For a long time, the leading theory was that the mass was blown away by stellar winds. An analysis of the starlight could help confirm the idea, but none was done since spectroscopy was still in its infancy in the 1840s.

While the light that came straight to Earth was lost to history, astronomers this decade were able to find rays from the eruption that had bounced off dust clouds before getting here.When they analyzed the light, they figured out that the Great Eruption had burned at around 4,725 degrees Celsius (8,540 °F), too cold for the stellar wind explanation.

This suggests that Eta Carinae’s chart climb was a unique event. Possibilities include a collision between two binary stars or a thermonuclear explosion in the star’s core.