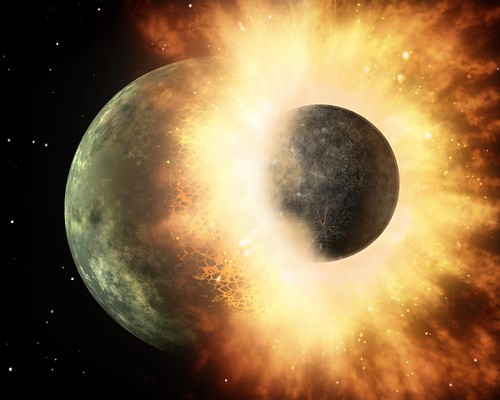 Theia is a hypothesized ancient planet in the Early Solar System that according to the giant impact hypothesis collided with the Early Earth around 4.4 billion years ago. Theia was about the size of Mars, and if it had not collided with Earth with a glancing blow, may have destroyed it.

In the end, Theia’s debris gathered together around Earth to form what was the early Moon. After the debris from the collision flew into space, scientists think that it originally formed 2 moons. The moons later merged to form the single Moon we know today.

While the Theia model, known as the Giant Impact Hypothesis, is the leading contender, it’s not the only one. Maybe the Moon was just captured somehow by Earth’s gravitational pull. Maybe the Earth and Moon formed around the same time as a pair. Maybe something else.

It’s also worth noting that the early Earth was probably hit by many large bodies, and Theia is just the one that led to the formation of the Moon, assuming that’s what happened.