This photo was taken during the April 2014 lunar eclipse during the early morning hours. Both lunar and solar eclipses have played an important part in the history of man. Early records of eclipses go back as far as China in 2134 B.C. and Greece in 762 B.C. Even clay tablets in Sumaria refer to eclipses.

In fact, scientists used eclipses to test Albert Einstein’s General Theory of Relativity. Einstein proposed his theory in 1915. In 1919, Sir Arthur Eddington of the Royal Astronomical Society launched an expedition to the West African island of Príncipe to observe a solar eclipse and prove or disprove Einstein’s theory.

By observing the eclipse, Eddington was able to prove that the sun creates gravity by bending space and time around it. As Professor Pedro Ferreira from the University of Oxford told Science Daily, this “first observational proof of general relativity sent shockwaves through the scientific establishment.” 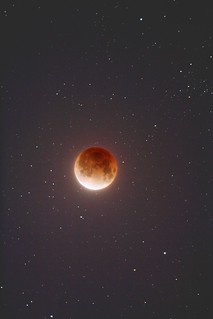