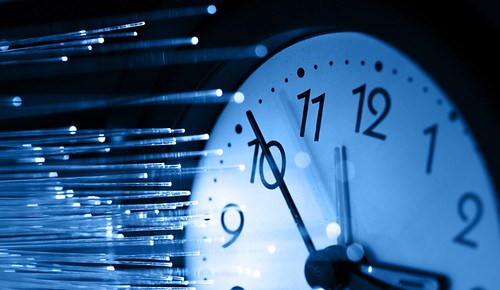 Although the speed of light still remains sacrosanct, are we at least making progress toward profaning time?

In fact, breaking out of the shackles of the here and now can be done—but it’s not terribly feasible. That’s because, as Einstein instructed us, the passage of time is relative. Time moves faster at greater distances from the center of a massive object, such as the Earth; the clocks on satellites passing overhead have to be calibrated for these miniscule, albeit very real, relativistic discrepancies. Remarkably, this effect is detectable at a difference in height of a mere foot, as National Institutes for Standards and Technology scientists demonstrated with two atomic clocks last year. Ergo, our head ages quicker than our hearts… though only about 90 billionths of a second over a lifetime.

This phenomenon of time dilation can, however, start to pay dividends for an astronaut standing on a neutron star—the compact, super-massive remnant of a giant star. According to Paul Davies, a theoretical physicist and cosmologist at the University of Arizona, “70 years experienced by the astronaut would correspond to 100 years on Earth, so the astronaut will have reached the year 2110 in just seven decades.” A nifty feat, until Davies drops the other shoe: “But of course, nobody could survive on the surface of a neutron star.”

Speed also makes time fly: Stationary clocks (relative to, say, an earthbound observer) tick faster than clocks in motion. And the closer an object gets to the speed of light, the slower time passes for it. One wouldn’t have to go on a long journey to reap a time-traveling benefit. “To get the big time-dilation factor, you just need to have motion in space, not necessarily over large distances,” says Jeff Tollaksen, a professor of physics and director of the Center for Quantum Studies at Chapman University in Orange, Calif. So in principle, a time machine could be as simple as a big centrifuge that spins someone around at near-light speed. But, Tollaksen adds, good luck engineering a way to do that without scrambling the person inside.

Despite the considerable caveats, “going forward in time is just a matter of money and engineering,” Davies says, “so big leaps could become a reality one day.” As for going back in time, physicists are far less optimistic. For starters, basic logic would seem to preclude such an act. Consider the “grandfather paradox”: A time traveler burrows into the past and kills his grandfather, thereby snuffing out his own eventual existence.

Yet in the quantum-mechanical sandbox Tollaksen plays in, the future can mind-bogglingly influence what comes before it. Recent experiments have shown that measuring a property of an object at a beginning and an end stage can alter the property’s value at an intermediate stage. The use of so-called weak measurements that do not disturb a delicate quantum-mechanical system has begun to offer a peek into this backwards causality. Could such a phenomenon be the mechanism that allows us to modify the past, if not re-experience it? Tollaksen, for one, thinks not. “I don’t see any conceivable breakthroughs that will get around the killing-your-grandfather paradoxes,” he says. “It looks to us that the best nature can do to make the future relevant to the present is via the stuff we’re doing with regard to weak measurements.”

There does remain a wild card for time (and faster-than-light travel): wormholes, or hypothetical tunnels through space–time. But don’t get your hopes up. “Their existence depends on anti-gravitating matter, which may exist only in microscopic amounts,” Davies says. “For this reason, even if wormholes can be created, they are likely to be of subatomic dimensions and to evaporate in a split second.”

So while the future beckons, the past might remain just that: the past. “Going back in time, for a human being, looks to be a much tougher proposition and may well be strictly impossible,” Davies says. But this time he offers an encouraging caveat: “Of course, if there is new physics to be discovered, all bets are off.”