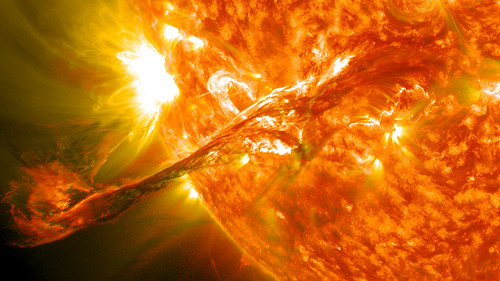 You don’t need to look too far to find unusual weather on a star. In fact, our sun is home to magnetic tornados. One of these was measured to be five times the size of the Earth—if it were on Earth’s surface, it would reach halfway to the Moon.

These tornados are made of superheated gas and plasma up to 2 million degrees Celsius (3.6 million °F). The winds in the tornado whip around at 300,000 kilometers (186,000 mi) per hour. The first tornado to be filmed was captured in 2011 by NASA’s Solar Dynamics Observatory.

Others have been filmed since, and they’ve been found to often come before coronal mass ejections. CMEs are blasts of plasma and radiation that shoot out of the Sun and have also been associated with sunspots. Figuring out how all of these magnetic phenomena fit together is a puzzle currently being probed by NASA’s supercomputers.

While not all magnetic tornadoes are 125,000 miles high, around 11,000 of some size rage across the Sun at all times. These smaller, more abundant tornados were only discovered in 2012. They may be part of the reason that the Sun’s corona is much hotter than its photosphere despite being further from the center, a long-standing mystery known as the coronal heating problem.