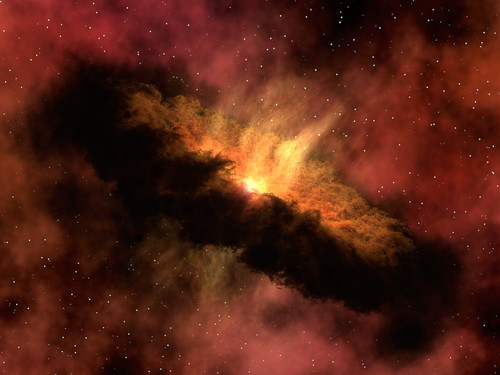 NGC 1333-IRAS 4B is a baby solar system. Its central star is still cocooned in an envelope of gas and dust. In the center of the envelope, orbiting the star, is a denser disk of materials that will likely eventually form planets.

This center disk is experiencing what can best be described as a hail storm. Enough water to fill Earth’s oceans five times over is raining onto the central disk. The central disk is warmer than the surrounding cloud of material, and when the pieces of ice reach the cloud, they vaporize.

This causes the water to glow with infrared light, and that’s why NASA’s Spitzer telescope was able to pick it up.This adds to our knowledge of how planet systems form.

This “steamy” phase of a star doesn’t last long, but the presence of water allows scientists to calculate the disk’s size, density, and temperature. The vapor itself will eventually refreeze and possibly end up as comets.