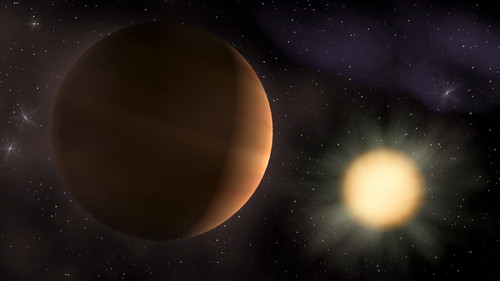 HD 80606b is another hot Jupiter, though it’s four times Jupiter’s mass. The planet is particularly interesting, as it has the most eccentric orbit yet observed. Its 111.4 Earth-day orbit takes it to 0.88 times the distance from the Sun to the Earth. Its closest pass to its star is 30 times closer and lasts for just a matter of hours.

A team from Geneva Observatory examined HD 80606b and determined that as it approaches its closest pass, someone floating above the planet’s surface would see the star’s brightness increase by a factor of 825. The result of the extra radiation is that the planet’s temperature more than doubles in six hours, from 527 to 1,227 degrees Celsius (980 to 2,240 °F).

That makes it the biggest temperature swing ever observed on any planet. Yet the almost 1,000 fold increase in sunshine doesn’t explain it—it would take a lot more than six hours for such a change to double the temperature of, say, Earth.

Scientists figured out that the sudden blast of radiation causes something like an explosion in the atmosphere facing the star. It produces winds of 17,700 kilometers (11,000 mi) per hour across the surface. The spin of the planet then creates giant, swirling shockwave storms that carry the heat around.