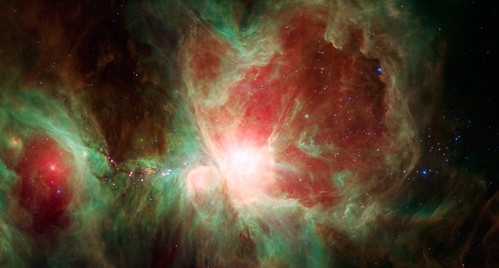 It’s not only planets that get rain. A contender for prettiest rain in the galaxy is around a proto-star named HOPS-68, a young Sun-like star that’s around 1,350 light years from Earth. It still has a collapsing cloud of dust around it, but scattered among the dust are tiny shards of olivine, a green crystal used to make jewelry, which are raining down on the star as it forms.

Like many gems, olivine forms at lava-like temperatures. The cloud around HOPS-68 is pretty cold, around –170 degrees Celsius (–280 °F). Astronomers think the olivine formed near the star before being blasted out by jets of gas.

Now it rains onto the embryonic star, falling “like glitter,” as one scientist put it. The discovery, made by NASA’s Spitzer Space Telescope, helps solve a mystery in our own solar system. Similar crystals were recently found in peripheral comets.

The findings suggest that the gems may have been formed in the early stages of our solar system and became frozen in comets after being flung away from the center.