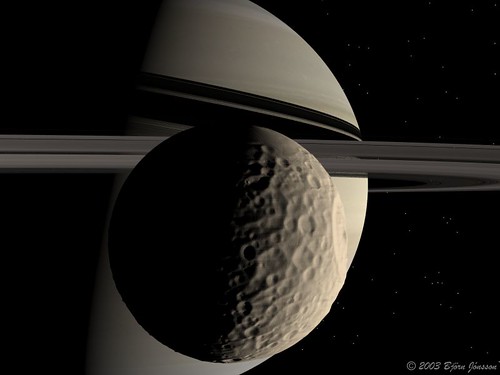 That’s no moon . . . actually, it is. You’re looking at Mimas, a moon of Saturn and one of the most heavily cratered objects in the solar system. It also happens to look just like the Death Star. And before you say, “Well, clearly Mimas was the inspiration for the Death Star,” we’ll just mention that the crater wasn’t discovered until three years after Star Wars Episode IV: A New Hope.Mimas is also quite mysterious; its orbit is closer to Saturn than Enceladus (its icy neighbor). Both moons are composed almost entirely of ice, but only Enceladus is tidally heated by Saturn enough to melt the ice and create geysers that shoot water into space. This doesn’t make a lot of sense because Mimas is much closer to Saturn, and its orbit is less circular, which should mean it experiences more heating than Enceladus. We have no idea why it doesn’t.