Space is awesome. There’s no arguing that. But all of the really cool stuff is way out there—beyond the edges our solar system—in deep space. In fact, our solar system is pretty lousy. Everyone learns about it in first grade: You’ve got nine planets (or eight since Pluto got the boot), a few boring moons flying around them, the Sun, and that’s pretty much it—right? Actually, space has more wonders than you could possibly imagine, and some of them are right in our backyard 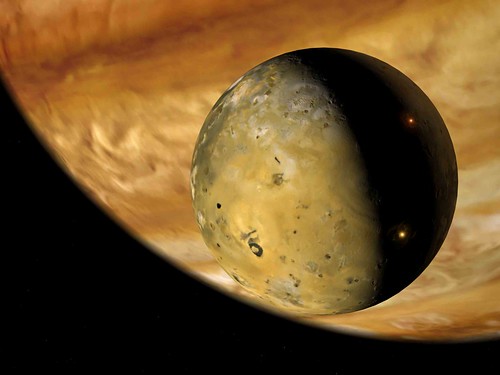 If ever there was a world that should remind you of Hell, it’s Jupiter’s moon Io. Seeming more like something out of Middle Earth than reality, Io has more volcanic activity than any body in our solar system. This geologic activity is caused by the intense tidal forces between Io and Jupiter, which are constantly pulling and stretching the moon. The eruptions on Io can be enormous, coating over 30 square kilometers (11.6 sq mi) in volcanic material, and they can be seen from space. Io’s route through Jupiter’s magnetosphere causes it to generate great amounts of electricity that make lightning storms in Jupiter’s upper atmosphere. But don’t think Jupiter gets the worst of this interaction—its intense magnetic belts strip 1,000 kilograms of material off of Io every second. This has the added effect of supercharging Jupiter’s magnetosphere, effectively doubling its size.