By Editors | On 18, Jan 2015 | 12 mins: 34 secs + -
2
President Obama Has Been To Mars
President Obama has been accused of being a secret Muslim, not being American, and, in some theories, a secret, sleeper candidate specifically designed to take down the USA from within. He has been criticized for a lack of a service record, along with a lack of experience at most things political before he took office.

However, some theorists claim that Obama only appears to be hiding those secrets because he is actually hiding one much bigger—one that would make him look good, perhaps, but that he cannot talk about to this day.

The theorists claim that, way back in the 1980s when Obama was in college, he participated in a joint program run by the CIA and DARPA and became a “chrononaut.” 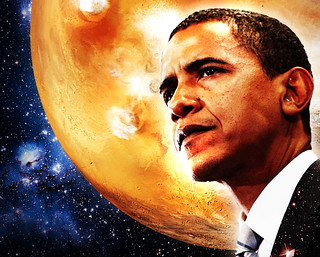 They claim that Obama was teleported to Mars using something called a “jump room” and that he went on dangerous missions on more than one occasion. We call these people “theorists,” but two of them claim to be breaking their silence by telling the truth—they were supposedly chrononauts as well.

These missions were supposedly meant to help us forge an alliance with the Martians to help protect us from intergalactic threats to our species, and Obama was supposedly told that his mission was to “be seen and not eaten.” Of course, if these theorists were actually telling the truth, they would probably not get away with sharing classified information so easily.