By Editors | On 18, Jan 2015 | 12 mins: 34 secs + -
3
The Comet Landing Conspiracy
Recently, the Philae lander managed to land on a comet through the efforts of the European Space Agency. However, while many people celebrated our continued skill in the arena of space travel, some theorists had other ideas about the entire event. Before long, due to the out-of-the-ordinary course of events, conspiracies started to crop up.

The European Space Agency did say that it heard mysterious sounds on the comet, which only increased speculation. The theories claim that the billions of dollars that were spent on the mission—and the sudden nature of it—all point toward the comet being an alien artifact. 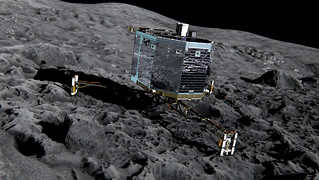 The theory also makes the dire warning that the object perhaps did not want to be found. Others suggest that it actually has a transmission tower and that photos have shown UFOs in the background, proving that the entire thing is a big alien affair that the governments of the world are trying to hush up.