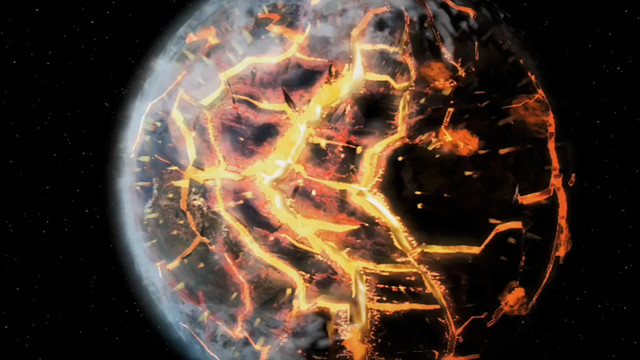 Physically destroying the Earth is hard. What would it take to vaporize the planet? Let’s define vaporization as blowing it up so hard that it disperses and cannot recollect due to gravity. How much energy would that take?

Think of it this way: take a rock. Throw it up so hard it escapes from the Earth. That takes quite a bit of energy! Now do it again. And again. Lather, rinse, repeat… a quadrillion times, until the Earth is gone. That’s a lot of energy! But we have one advantage: every rock we get rid of decreases the gravity of the Earth a little bit (because the mass of the Earth is smaller by the mass of the rock). As gravity decreases, it gets easier to remove rocks.

You can use math to calculate this; how much energy it takes to remove a rock and simultaneously account for the lowering of gravity. If you make some basic assumptions, it takes roughly 2 x 1032 Joules, or 200 million trillion trillion Joules. That’s a lot.

For comparison, that’s the total amount of energy the Sun emits in a week. It’s also about a trillion times the destructive energy yield of detonating every nuclear weapon on Earth.

If you want to vaporize the Earth by nuking it, you’d better have quite an arsenal, and time on your hands. If you blew up every nuclear weapon on the planet once every second, it would take 160,000 years to turn the Earth into a cloud of expanding gas.

And this is only if you account for gravity! There are chemical bonds holding the Earth’s matter together as well, so it takes even more energy.

This is why Star Wars is not science fiction, it’s fantasy. The Death Star wouldn’t be able to have a weapon that powerful. The energy storage alone is a bit much, even for the power of the Dark Side.

Even giant collisions can’t vaporize the planet. An object roughly the size of Mars impacted the Earth more than 4.5 billion years ago, and the ejected debris formed the Moon (the rest of the collider merged with the Earth). But the Earth wasn’t vaporized. Even smacking a whole planet into another one doesn’t destroy them!

Of course, the collision melted the Earth all the way down to the core, so the damage is, um, considerable. But the Earth is still around.

The Sun will eventually become a red giant, and while it probably won’t consume the Earth, it’ll put the hurt on us for sure. But even then, total vaporization is unlikely (though Mercury is doomed). Planets tend to be sturdy. Good thing, too. We live on one.