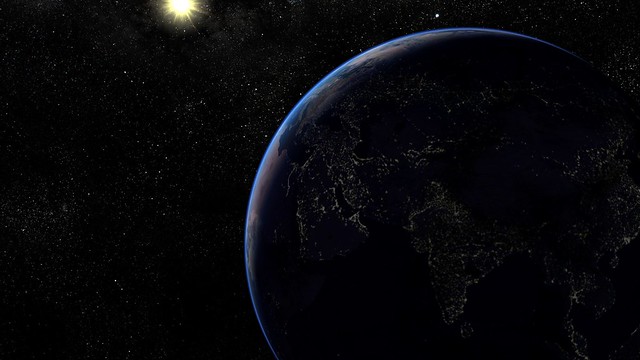 Well, you’d die. But if you had some magic material coating the walls of your 13,000 km deep well, you’d have quite a trip. You’d accelerate all the way down to the center, taking about 20 minutes to get there. Then, when you passed the center, you’d start falling up for another 20 minutes, slowing the whole way. You’d just reach the surface, then you’d fall again.

Assuming you evacuated the air and compensated for Coriolis forces, you’d repeat the trip over and over again, much to your enjoyment and/or terror.

Actually, this would go on forever, with you bouncing up and down. I hope you remember to pack a lunch.

Note that as you fell, you accelerate all the way down, but the acceleration itself would decrease as you fell: there is less mass between you and the center of the Earth as you head down, so the acceleration due to gravity decreases as you approach the center. However, the speed with which you pass the center is considerable: about 7.7 km/sec (5 miles/second).

In fact, the math driving your motion is the same as for an orbiting object. It takes the same amount of time to fall all the way through the Earth and back as it does to orbit it, if your orbit were right at the Earth’s surface (orbits slow down as the orbital radius increases).

Even weirder, it doesn’t matter where your hole goes: a straight line through the Earth from any point to any other (shallow chord, through the diameter, or whatever) gives you the same travel time of 42 or so minutes.

Gravity is bizarre. But there you go. And if you do go take the long jump, well, your trip may be a wee bit unpleasant.