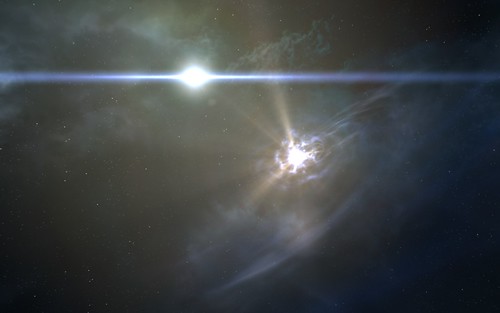 Short gamma ray bursts are believed to come from something altogether different. While there are competing theories and diagreement, many believe that short bursts come from two neutron stars colliding. While neutron stars are so tiny, you might not expect them to ever come close enough to collide, don’t forget that an average neutron star will be twice as massive as the Sun and have gravity to match.

If two neutron stars get trapped together by gravity, it’s thought that they would slowly and inexorably fall together. As they rotate around each other, they would emit gravitational waves, losing energy and thus losing speed. With the loss of speed, they’d lose orbital distance. Eventually (probably over millions of years), they’d fall so close together that they’d crash into each other. The collision would be violent, but swift, emitting a brief but gargantuan belch of gamma rays before both stars collapsed into a silent black hole.