Ok, so I have gamma ray bursts on the brain at the minute, which isn’t unexpected after reading about them for a week. Besides, frankly, they’re so damn fascinating! Seriously, the most dramatically powerful events in the known Universe, and we still don’t know precisely what causes them. Just… fascinating. So to let some of this escape from my brain, here’s 5 things about GRBs which may interest you…

1
There are “long bursts“ 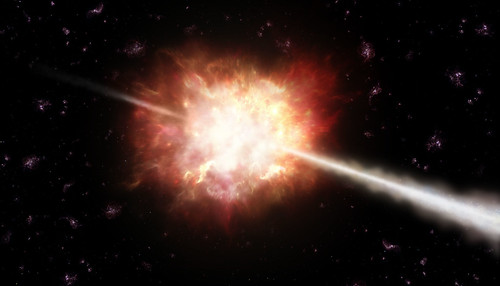 Long bursts are widely believed to be a type of supernova event. In fact, some have been observed in association with a supernova (the first being GRB 980425). The process is suitably melodramatic. As soon as an extremely massive, fast rotating star burns enough fuel, it’s core becomes so massive that it can’t withstand it’s own gravity. It collapses, in a similar way to a regular supernova, but it doesn’t stop there. Because these stars are so massive, more and more stellar material is sucked into the core, collapsing it directly into a black hole. The star then proceeds to devour itself, releasing such vast amounts of energy that two beams of energy puncture the star at it’s North and South poles. Think about that for a moment. Enough energy to puncture a star. A massive one at that!

It’s one of these beams of intensely bright radiation that we see as a “Gamma Ray Burst”.