Scientists have identified in Egypt a previously unknown amphibious four-legged whale that lived around 43 million years ago.

Named after Anubis the god of death, the fossil of the amphibious Phiomicetus Anubis was about ten feet long (body length of about 3m) and a mass of about 600kg with a strong jaws to catch prey — was likely a top predator at the time, scientists said.

The fossil that the team have investigated belongs to the Protocetidae, a group of extinct whales from the Eocene era which started 56 million years ago and ended 33.9 million years ago. Researchers says that this whale was able to walk on land and swim in water.

The fossil — a partial skeleton — was originally discovered in Fayum Depression, Egypt’s Western Desert (which is part of the Sahara) a fossil-rich basin southwest of Cairo, an area once covered by sea. Also known as Whale Valley, literally translated as “Valley of the Whales”, is one of the most important paleontological sites in the world.

Phiomicetus Anubis is a key new whale species, and a critical discovery for Egyptian and African palaeontology,

said Abdullah Gohar of MUVP, lead author of a paper on the discovery published in the journal Proceedings of the Royal Society B. 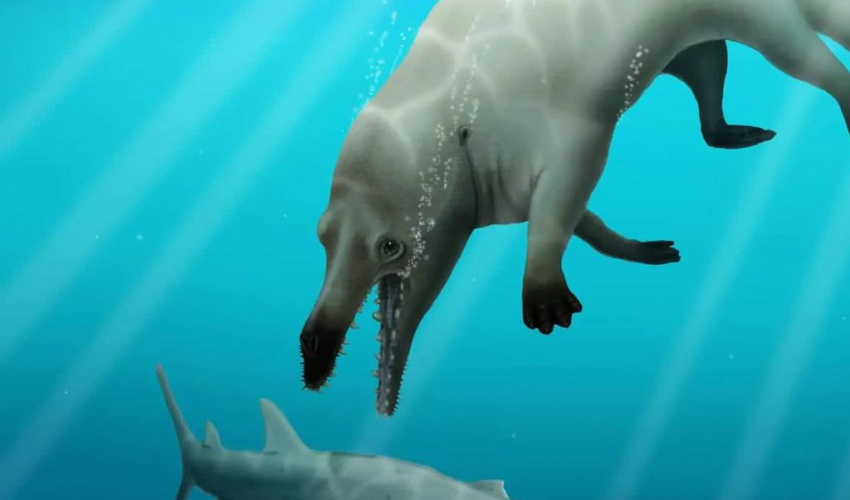 Although today’s whales live in the water, their ancestors started out on land. This discovery is not the first time whale with legs to be found — early whale ancestors walked on four legs. But what make this discovery special is that the Phiomicetus Anubis sheds more light on whale evolution, the species is considered to be the earliest type of semi-aquatic whale to be found in Africa.

This fossil really starts to give us a sense of when whales moved out of the Indo-Pakistan ocean region and started dispersing across the world,

We named it ‘Phiomicetus anubis’ (discovered whale) and ‘Phioum’ in honour of Fayum depression. ‘Cetus’ means in Latin ‘whale’ and ‘Anubis’ is the god of death in Pharaoh time. So, it’s a very important discovery because it documented one of the missing link or transitional form in the history of (the) whale from living totally on land as a terrestrial animal to a fully aquatic whale that is living today,

The transition took place over the span of 10 million years, whales turned into carnivorous creatures in the ocean.

I will keep searching for whale fossils”,says Gohar. “I want to help complete the picture of whale evolution in Africa and the world, and reach for the first fully aquatic whale.