The Geminids meteor shower, the king of the meteor showers, will peak on the night of 13-14 December. It is anticipated to be an amazing view for the spectators, so, amateur stargazers, grab your woollies and look to the night sky.

The Geminids meteor shower is easy to spot from the northern hemisphere, so, if weather conditions are pretty good, who want to enjoy the show, it can be seen on the nights prior, after the moon sets. This is because it is one of the few meteor shower whose radiant ‘output’ coincides with the sunset.

No astronomy activity is easier or more social than meteor watching,

You don’t need any equipment except a chair. Just grab some friends, bundle up, and watch the show.

Basically for any meteor shower, the really good time is always going to be after midnight. It just helps that you can start to see the Geminids earlier,

So, 2 or 3 o’clock in the morning is ideal for going out. Even if you wanted to get up at 5 a.m., you may still start to see them, although you’ll see fewer of them as you get closer to sunrise. But it’s still worth a try.

This phenomenon is quite interesting as the Geminids meteors shower do not come from a comet but an asteroid — in rare cases, asteroids rather than comets cause these shower. The meteors shower appear to be related to the asteroid known as 3200 Phaethon. 3200 Phaethon is the 4th nearest rock closer to the sun, its perihelion at only 13 million miles (21 million kilometers) — or its closest approach is of 0.14 Earth-sun distances — that’s half the Mercury-sun distance.

Phaethon is an Apollo asteroid with just 5 kilometers in diameter, it is actually behaving like a comet more than like an asteroid. Phaethon’s orbit puts it in the same originating region as other asteroids (between Mars and Jupiter): its aphelion is beyond Mars, but when its come closer to the sun its surface temperatures rise above an estimated 1,300° Fahrenheit (700°C), therefore, it leaves small pieces of debris behind and when the Earth passes through this trail, we see meteors in the sky. Phaethon is also a Mercury-, Venus-, Earth-, and Mars-crosser as a result of its high orbital eccentricity. 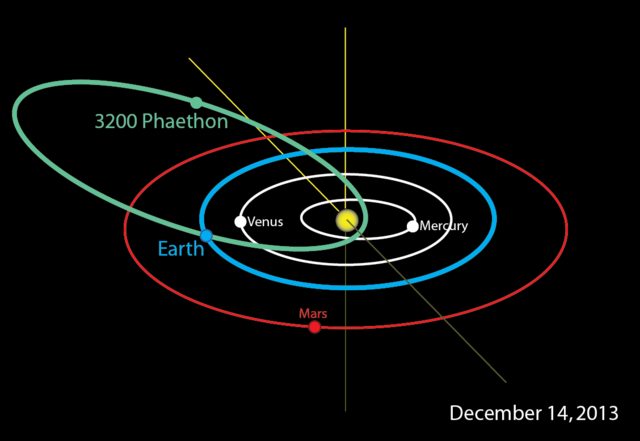 Scientists say the Geminids meteors shower are usually bright but this year, conditions are just right for a true spectacle, the moon will be only a few days old, setting early in the evening. The shower will streak as many as 120 falling stars per hour across the sky.

We’ll have a waxing crescent moon, which means it’s extra dark at night

As to observe it, astronomers notes that you do not need any optical ‘aid’ to see the shower, but it still requires some patience to spot more than one or two.

I get a lot of questions about people asking, ‘So, do I need a telescope to see a meteor shower, or binoculars?’

I say, ‘Nothing. You need a chair that you can sit back in comfortably and watch the sky.’ If you’re using a pair of binoculars or a telescope—the more magnification you’ve got, the smaller the piece of sky is that you are looking at. So, put all of that stuff away.

You don’t have to worry about being in a specific location,

I generally tell people to go outside, face east, and look up above your head. If that’s the only sky patch you have available, great—use it. If you can see the whole sky down to the horizon, great—use it. There’s no one particular direction to look, because these things range over such a large area of the sky, there’s always a chance that you’ll see something.

Note: Astronomers say the best time to observe the shower is around 1 p.m. EST on Dec. 14.

Bottom line: This shower is called the Geminids because it radiates from the two Gemini stars, Pollux and Castor — the two brightest stars of Gemini.