As NASA’s New Horizons spacecraft has begun its long-awaited historic encounter with Pluto, entering the first of several approach phases that will culminate with the first close-up flyby of the Pluto system six months from now, we decide to write an interesting-list about dwarf planet pluto including 15 curious things maybe you didn’t know about this demoted planet. Enjoy! 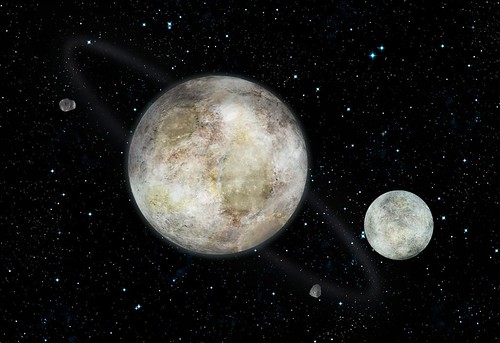 1. The name Pluto, after the god of the underworld, was proposed by Venetia Burney (1918–2009), who, at the time was an eleven-year-old schoolgirl in Oxford, England. Interested in classical mythology, she mentioned the name to her grandfather who passed on to an acquaintance, astronomy professor Herbert Hall Turner, who in turn passed it on to colleagues in the United States.

2. Pluto’s surface is certainly one of the coldest places in the solar system. Its average temperature sits at about – 375 degrees F (- 225 degrees C).

4. NASA’s New Horizons mission will be the first probe to reach and study Pluto. It was launched back in January of 2006, and is expected to reach the atmosphere of Pluto sometime around July of 2015.

5. When Pluto was discovered it was initially believed to be larger than Earth. In actual fact, Pluto is only 1,430 miles (2,302 kilometres) in diameter and is about 1/6th the size of Earth. Pluto is actually smaller than our own Moon.