‘World’s Largest Camera’ Ever will be Pointed at the Sky

You think you’re pretty cool with your 13 or even 20-megapixel cameras on your smartphones – and those DSLR guys with their HDR shots, don’t get me started. Well, the SLAC National Accelerator Laboratory has both of them beat in getting DOE approval for the world’s most powerful camera.

The LSST, to be constructed in Chile, will have an 8.4 m primary mirror and will operate at wavelengths from 320 to 1060 nm. Composed of 189 tiled 4k x 4k CCD sensors, the camera itself will be cryogenically cooled to -100°C and will have a readout time of 2 s or less.

“This important decision endorses the camera fabrication budget that we proposed,” says LSST director Steven Kahn. “Together with the construction funding we received from the National Science Foundation in August, it is now clear that LSST will have the support it needs to be completed on schedule.” 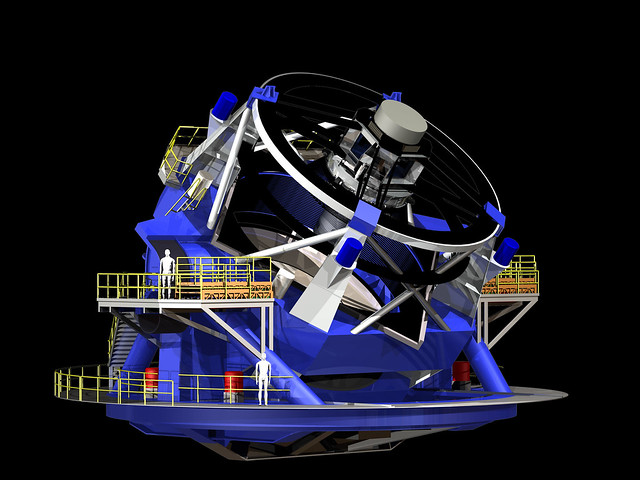 Rendering of the LSST camera. SLAC is leading the construction of the 3,200-megapixel camera, which will be the size of a small car and weigh more than 3 tons. The digital camera will be the largest ever built, allowing LSST to create an unprecedented archive of astronomical data that will help researchers study the formation of galaxies, track potentially hazardous asteroids, observe exploding stars and better understand mysterious dark matter and dark energy, which make up 95 percent of the universe. (SLAC National Accelerator Laboratory) ~ Click to zoom

Science operations are scheduled to begin in 2022 with LSST taking digital images of the entire visible southern sky every few nights from atop a mountain called Cerro Pachon in Chile.

It will produce the widest, deepest and fastest views of the night sky ever observed. Over a 10-year time frame, the observatory will detect tens of billions of objects – the first time a telescope will catalog more objects in the universe than there are people on Earth – and will create movies of the sky with details that have never been seen before.

LSST will generate a vast public archive of data – approximately 6 million gigabytes per year – that will help researchers study the formation of galaxies, track potentially hazardous asteroids, observe exploding stars and better understand dark matter and dark energy, which make up 95 percent of the universe but whose nature remains unknown.

“There’s tremendous opportunity for the public to not only learn about science but participate,” Kahn said said. “LSST will be a direct connection with the fact that the universe is alive and evolving and constantly changing.”

“This is changing the way we do science,” UW astronomer Andrew Connolly, who is leading the initiative, said during a TED talk. “The software is as critical to the science as the telescopes and cameras we build.”

LSST is being funded by the National Science Foundation and the Department of Energy.

Watch Video: Andrew Connolly: What’s the next window into our universe?
Source: https://goo.gl/XPHqWK.