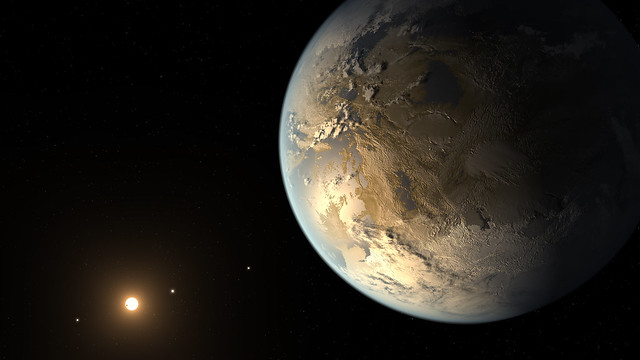 Zooming in to his final destination, we thinks the biggest, baddest extraterrestrials of all could live on a planet much like our own where evolution has taken a very different route.

For the best possible chances for life, especially complex animal life like ourselves, would be an earthlike place,
a true twin of our home world.

But even if we were to rerun the story of evolution on Earth, you wouldn’t expect the specifics of life to come out the same because there’s so much chance and randomness inherent to the process of evolution.

So, perhaps, on an alien, earthlike world, there’s an octopus specie which has developed a hard exoskeleton to support itself against the gravity once it’s come out of its aqueous environment. This image shows an artist’s concept of how an alien octopus could have evolved in order to walk on dry land.

So, in a galaxy where life can evolve in an infinite number of scary ways, What are the chances of a planet developing intelligent, self-aware life, like us?