With 4,826 confirmed planets and Kepler candidates and the discovery of a gas giant with a colossal system of 160 rings, it may seem like we know quite a bit about what is out there in the cosmos. However, the universe loves to confuse us, and—frankly—humanity has yet to come to grips with what is in our own solar system. 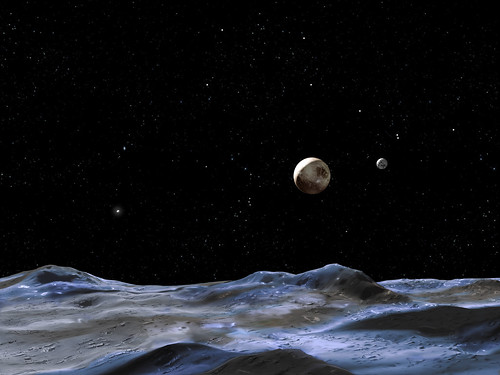 We have all heard about Pluto, especially after its declassification as a planet in 2006 and its coverage in the news due to the upcoming New Horizons probe flyby. But have you ever heard of what is sometimes referred to as “anti-Pluto“?

90482 Orcus is a Kuiper belt object with almost exactly the same orbital period, inclination, and distance from the Sun as Pluto.

Both Pluto and Orcus also share a 2:3 resonance with Neptune, although Orcus is oriented differently. Not only are their orbits almost identical, but they both have moons that are very large relative to their size. Pluto’s moon Charon is half the size of Pluto, and Vanth has been estimated to be one-third the size of Orcus.

The name “Orcus” was chosen because it’s the Etruscan equivalent for the Roman “Pluto.”The surface of Orcus is covered with crystalline water ice and, possibly, ammonia ice, which indicates that some sort of geological activity and cryovolcanism may have taken place in the past. If the presence of ammonia is confirmed, Orcus could help scientists understand the formation of other trans-Neptunian objects.