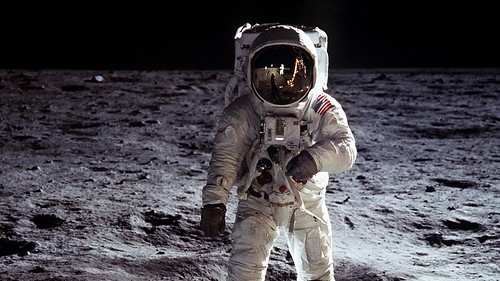 Neil Armstrong’s famous words as he took his first step onto the Moon —“That’s one small step for a man, one giant leap for mankind”— have been the subject of endless debate, with many believing he misspoke by leaving out the “a” before man, making his statement redundant. That aside, the first words spoken while the spacecraft was actually on the surface of the Moon have traditionally been understood to be the words that Armstrong said shortly after safely landing: “Houston, Tranquility Base here. The Eagle has landed.”

However, there was so much technical jargon being relayed back and forth between the two astronauts during the landing that it is very difficult to say exactly what the very first words spoken on the Moon were. Further complicating matters was the fact that Armstrong’s landing was so soft that neither man could ever be completely sure what was said immediately after they touched down.

According to the transcripts, it boils down to three likely candidates. It could have been Aldrin pointing out that the contact light had turned on by saying, “Contact light.” Armstrong then instructed Aldrin to turn off the descent engine by saying, “Shut down.” Aldrin followed by turning off the engine and saying, “Okay. Engine stop.” None of these sound very momentous, which is why it’s probably best to stick with Armstrong’s message to mission control in Houston.