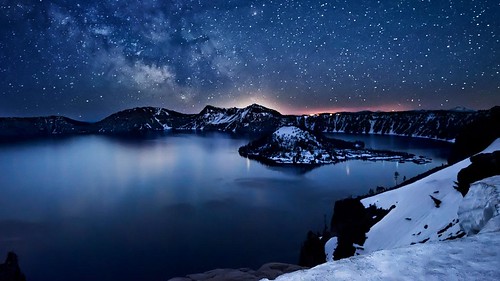 Crater Lake is a beautiful caldera lake found in South-central Oregon State, USA. It has a stunning deep blue color and brilliant water clarity, and forms the main feature in Crater Lake National Park. The lake has almost no signs of pollution, and is one of the purest bodies of water in the States, with a record clarity of 43.3 meters.

The lake was formed about 7,700 years ago when volcano Mount Mazama, fell into the caldera beneath it. It is believed that the Native American Klamath tribe saw Mount Mazama fall and the formation of Crater Lake. Their legends and stories tell of a great battle between the sky god, Skell and Llao, the god of the underworld.

The Mountain was destroyed during the battle and the lake was created. The Klamath people used the lake for vision quests, and the lake is still held in high spiritual regard by the tribe.

The lake is also known for the “old man of the lake”, which is a full tree, now a stump, which has been bobbing around, vertically, in the lake for over a century. It has been very well preserved due the cold water inside the lake.