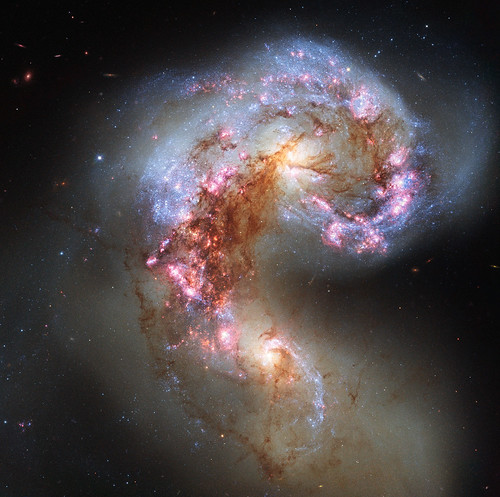 Here, we have another pair of galaxies devouring one another, but much farther along in the process. The only way you can tell there used to be two galaxies here is by the yellow clusters of stars at either end—these used to be the galactic centers.

Now one giant, amorphous blob, these galaxies are slowly chugging toward a state of equilibrium that with result in the new galaxy’s final shape.

Most of the currently existing star clusters in this galactic pair will part ways before the new galaxy is totally formed—only the largest clusters will survive the merger. Perhaps the most interesting thing we can learn from observing this process is what will happen when the Milky Way inevitably merges with the nearby Andromeda galaxy, which is headed in our direction. Don’t worry, though: It won’t be for a few billion years.