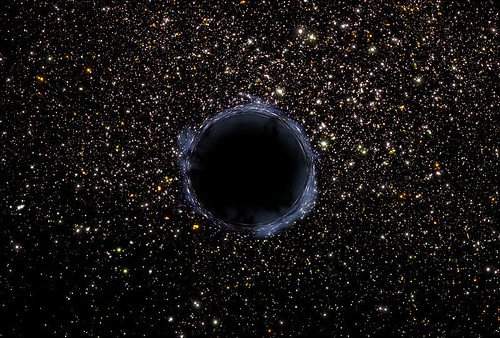 The Hubble Deep Space Field is an image we obtained by pointing the Hubble telescope at “empty” space, and it contains thousands of distant galaxies. Whenever we look at an “empty” space in the Eridanus constellation, though, we see nothing. At all.

It’s just a black void spanning a width of over a billion light years. Almost any other patch of “emptiness” in the night sky will return an image of galaxies with about the same dispersal, but this immense void is bizarre. We have several methods for detecting what we expect to be dark matter, but even those have come up empty when we peer into the Eridanus void.

One controversial theory is that the void contains a supermassive black hole that all of the nearby galactic clusters orbit around, and that this high-speed orbit accounts for the “illusion” of an expanding universe.

A counter-theory suggests that all matter eventually clumps together, forming galactic clusters, and this drift forms voids between those clusters over time.But that doesn’t explain the second void astronomers found in the southern night sky, and this one is 3.5 billion light years wide.

This is so wide that it’s difficult for the big bang theory to explain, as the universe hasn’t been around long enough for such an enormous void to form through standard galactic drift. Maybe there’s something to this enormous black hole thing after all.