Titan is Helping Scientists to Understand the Atmospheres of Exoplanets

Titan — that smoggy, orangy moon circling Saturn — is of great interest to exobiologists because its chemistry could be good for life.

It has a thick atmosphere of nitrogen and methane and likely has lakes filled with liquid hydrocarbons, and scientists believe there is enough light filtering down into the atmosphere to drive chemical reactions.

A team of researchers led by Tyler Robinson, a NASA Postdoctoral Research Fellow at NASA’s Ames Research Center, have published their findings in the Proceedings of the National Academy of Sciences.

“It turns out there’s a lot you can learn from looking at a sunset,” Robinson said.

Despite the staggering distances to other planetary systems, in recent years researchers have begun to develop techniques for collecting spectra of exoplanets. When one of these worlds transits, or passes in front of its host star as seen from Earth, some of the star’s light travels through the exoplanet’s atmosphere, where it is changed in subtle, but measurable, ways.

The spectra that telescopes pick up can then tell scientists information about what the atmosphere is made of, what temperature it is, and how it is structured. (This science, it should be noted, is in its very early stages and works best on very large exoplanets that are relatively close to Earth, since the planets are so small and far away.)

Robinson and his colleagues exploited a similarity between exoplanet transits and sunsets witnessed by the Cassini spacecraft at Titan. Called solar occultations, these observations allowed the scientists to observe Titan as a transiting exoplanet without having to leave the solar system. 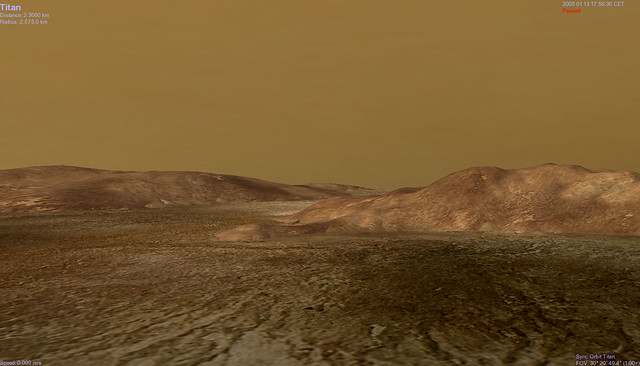 Many worlds in our solar system, including Titan, are blanketed by clouds and high-altitude hazes. Scientists expect that many exoplanets would be similarly obscured.

Clouds and hazes create a variety of complicated effects that must be disentangled from the signature of these alien atmospheres, and present a major obstacle for understanding transit observations. Due to the complexity and computing power required to address hazes, models used to understand exoplanet spectra usually simplify their effects.

“Previously, it was unclear exactly how hazes were affecting observations of transiting exoplanets,” stated Tyler Robinson, a postdoctoral research fellow at NASA’s Ames Research Center who led the research. “So we turned to Titan, a hazy world in our own solar system that has been extensively studied by Cassini.” 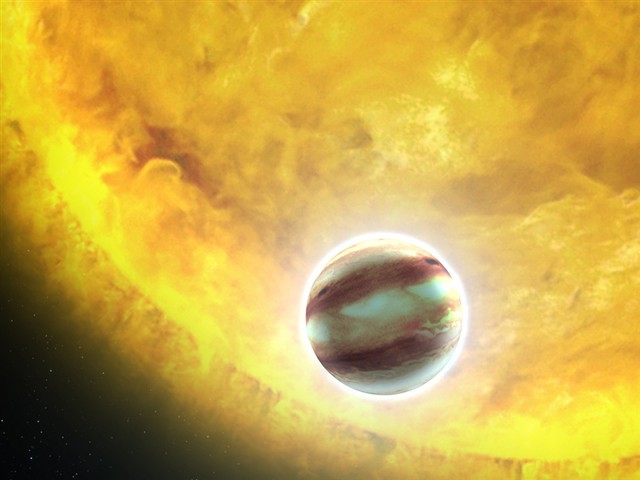 An artistic impression of an exoplanet in transit across the face of its star.
Click to zoom

To do this, Robinson’s team used data from the Cassini spacecraft during four solar occultations, or times when Titan passed in front of our own sun from the perspective of the spacecraft. They found out that the moon’s hazy atmosphere makes it difficult to figure out what is in its spectra.

“The observations might be able to glean information only from a planet’s upper atmosphere,” NASA stated. “On Titan, that corresponds to about 90 to 190 miles (150 to 300 kilometers) above the moon’s surface, high above the bulk of its dense and complex atmosphere.”

The haze is even more powerful in the shorter (bluer) wavelengths of light, which contradicts previous studies assuming that all wavelengths of light would have the same distortions. Models of exoplanet atmospheres usually have simplified spectra because hazes are complex to model, requiring a lot of computer power.

Researchers hope to take these observations of Titan and then use them to better inform how exoplanet models are created.