A recent study published in February’s issue of the journal Astrobiology has a surprising theory suggesting biological processes might have been at work on the Red Planet.

A research team claims that on the Martian meteorite Yamato 000593 there is evidence of ancient microscopic life forms who inhabited in the past the red planet. On this rock it were observed microscopic tunnels and spherules that were dug, long time ago, by microorganisms who lived on Mars. 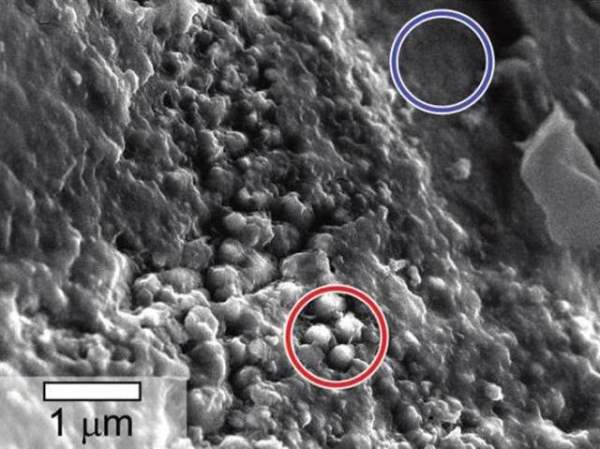 The red circle in this photomicrograph highlights spherules in a meteorite from Mars that are enriched in carbon, compared with the background material indicated within the blue circle.

The new theory is already highly debated in the scientific community. 18 years ago, other researchers announced they had found evidence of life forms on other Martian meteorite Alan Hills 84001 (ALH84001). Then, many scientists have argued that they had abiotic origin.

The research team will continue to analyze the meteorite Yamato 000593 within 13.5 kg, it was formed on Mars about 1.3 billion years ago and blasted into space by a cosmic impact and fell to Earth, landed in Antarctica 10,000 years ago. Yamato 000593 was discovered in 2000 by a team of Japanese researchers. 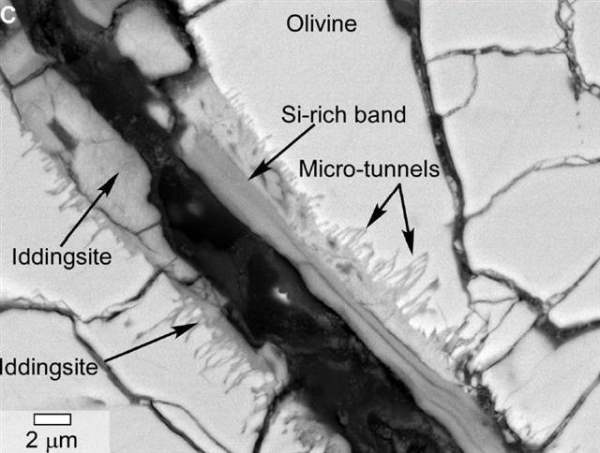 This photomicrograph shows bands of minerals inside a meteorite from Mars, including “micro-tunnels” that researchers say are suggestive of microbial weathering.

“We must have to analyze the carbon molecules found on meteorite” said Everett Gibson, which is part of the research team and the team that reviewed in 1996 the meteorite ALH84001.

Currently, the rover Curiosity is on Mars, seeks evidence of the presence of organic carbon. But it is also essential that scientists can take soil samples to analyze back on Earth, using precise instruments so that the results will be accurate.

“That could only happen over decades, so, until then, Martian meteorites are the best option for research”, says Gibson.