Saturn’s moon Enceladus is a mystery. From Earth it looks tiny and cold, and yet it’s not a dead hunk of rock. Actually, Enceladus makes the short list for most interesting places in the Solar System. Passing spacecraft see trenches and ridges, similar to Earth’s, and in 2005 NASA’s Cassini mission spotted ice geysers streaming from its south pole.

Now, new evidence suggests the third crucial component (beside liquid ocean & organic chemicals) necessary for life is also present on Enceladus: an energy source. Though the moon is too far from the sun for photosynthesis to occur, in a new study, scientists determined that hydrothermal activity is occurring on Enceladus’ ocean floor.

This finding is the first evidence of active hydrothermal vents beyond the oceans of Earth. Moreover, conditions deep under the icy surface of Enceladus could be similar to those that gave rise to the first life on Earth, the researchers said.

The team of scientist led by the University of Colorado’s Laboratory for Atmospheric and Space Physics found tiny grains of rock — just 2–8 nm in radius, not much bigger than a strand of human DNA — with the Cassini spacecraft they believe were formed by hydrothermal vents in the ocean of Enceladus. The grains are rich in silicon and are like what is found in sand and quartz here on Earth, which are commonly formed by hydrothermal processes. The existence of these grains can only mean that there is an active hydrothermal system working on Enceladus, according to the authors of the paper. 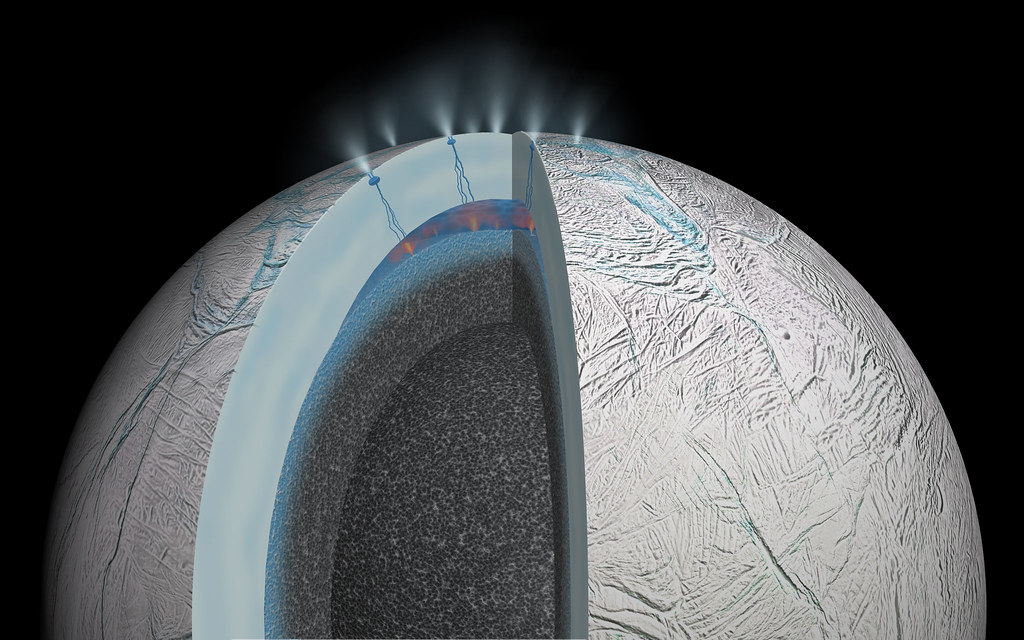 The paper’s authors spent four years studying data from the Cassini spacecraft and performing computer simulations and experiments to reach their conclusions. “We methodically searched for alternative explanations for the nanosilica grains, but every new result pointed to a single, most likely origin,” says Frank Postberg, a scientist who works with Cassini’s dust analyzer data at the University of Heidelberg in Germany and is a co-author on the paper.

Sean Hsu, an astrophysicist at the University of Colorado, who helped to lead the team behind this new discovery, says the discovery happened in what was perhaps a counterintuitive way. He and his colleagues estimated the temperature, salinity, and approximate pH of Enceladus’s ocean by studying the dust in Saturn’s outermost ring.

It took roughly a billion years for life to evolve on Earth. So if Enceladus’ ocean is only 100 years old, for instance, it’s hard to imagine any organisms living in it.

But for all we know, even the emergence of life on Earth could have been a singular accident — an exceedingly unlikely event that might not occur again, even given unlimited time. Or it could be a predictable event that happens whenever conditions are right, and maybe even takes far less than a billion years most of the time.

Anyway, there’s no evidence of such life (yet), but that doesn’t seem to be the main focus of the scientist’s excitement. It’s the fact that Enceladus has “ongoing active processes” similar to those on Earth and capable of supporting life. If such processes can exist on a small moon, then they can also exist on an abundance of other planets out there.

Scientists are excited for future missions to Enceladus to better determine if the moon’s sea does, indeed, harbor life. Cassini will sample the moon’s water plumes again in October. But, unfortunately, the spacecraft doesn’t have the necessary instruments to detect life. And, it will likely be a while before any subsequent mission to Enceladus is realized. NASA’s priority is Jupiter’s moon Europa–another moon that may be home to extraterrestrial life.