Researchers Estimated Precisely The Milky Way’ Weighs. How Heavy Is It?

How do astronomers estimate the mass of the Milky Way galaxy? It seems like a simple question, but it is not. Our galaxy consists of roughly 100 billion stars, stretching up to 200,000 light years from edge to edge, wide enough to makes it very difficult to measure.

But now, a team of scientists led by Andreas Küpper used stars located outside of Milky Way’s giant disk orbiting it in a stream-like structure, to clarify its weight to high precision.

The new study, published in The Astrophysical Journal, shows that such streams, produced by dissolving globular clusters — (rich, compact groups of thousands to several millions of stars) — orbiting the Milky Way, can be used to measure not only the weigh of our galaxy, but also to determine the location of the sun within it.

Globular clusters are compact groups of thousands to several millions of stars that were born together when the universe was still very young.

They orbit around the Milky Way and slowly disintegrate over the course of billions of years, leaving a unique trace behind. Such star streams stick out from the rest of the stars in the sky as they are dense and coherent, much like contrails from airplanes easily stick out from regular clouds.

Andreas Küpper and his colleagues used data from the Sloan Digital Sky Survey, which collated a decade’s worth of scans of the northern sky. 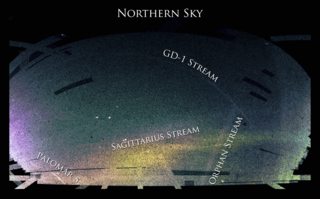 Northern Hemisphere of the sky. © Ana Bonaca. Click to zoom

We found the wiggles to be very pronounced and regularly spaced along the stream,” said Balbinot. “Such variations cannot be random.

An important advance in this work was using robust statistical tools – the same ones used to study changes in the genome and employed by internet search engines to rank websites.

This rigorous approach helped in achieving the high precision in weighing the Milky Way.

Such measurements have been tried before with different streams, but the results were always quite ambiguous.

Our new measurement breaks these ambiguities by exploiting the unique density pattern that Palomar 5 created as it orbited around the Milky Way for the past 11 billion years.

In the future, we aim at using more structures like the Palomar 5 stream to gain an even higher precision and to create the most realistic model of the Milky Way to date. From the improved precision we hope to learn about the formation and composition of our home galaxy, and to understand how the Milky Way compares with other galaxies in the Universe.

So far, the results indicate that the Milky Way is a healthy patient — neither too skinny nor too heavy for its size.