Was Planet Nine Captured By The Sun During The Cluster Phase?

Is planet nine actually an exoplanet? New study investigate the prospects for the capture of Planet 9 from other stars during the dissipation of the Sun’s birth cluster.

Planet 9 is a hypothetical planet of several Earth masses or greater lurking within the Solar System lying at several hundred AU, far beyond 150 AU, whose gravity explains the unusual patterns in the distributions of trans-Neptunian objects (TNOs).

The idea of planet 9’s existence was first developed by astronomer de la Fuente Marcos in 2004 who proposed the existence of at least two distant planets far beyond Pluto disturbing the orbits of the most distant KBO’s (Kuiper belt objects). But the Current interest for planet 9 has been fomented by Batygin & Brown in 2016 who found solid evidence of a ninth planet in our solar system from simulations run through mathematical and computer modeling.

So how the Solar System might have come to host a wide-orbit eccentric body such as Planet 9? Astronomers says there are evidence leading to this “scenario”.

Our sun was born in a sizeable cluster with a few thousand other stars. The cluster lasted about ten million years before expanding and dissolving, sending each star on its own way throughout the galaxy. During the cluster phase, stars frequently come close to other stars and give each other gravitational kicks. If two stars happen to be close enough to each other, then they can find themselves gravitationally bound on a wide orbit. If such an instability happens, then stars can capture planets floating around among them in these clusters.

So, did that happen with planet 9? In the new study, astronomers investigate the prospects for the capture of a wide-orbit planet by the Sun in a close encounter with another star with a mass range from 0.1 to 1.5 solar masses.

After running the simulation, astronomers say that in order to capture planet 9, this scenario must satisfy three conditions:

The encounter must be more distant at least > 150 au to avoid perturbing the Kuiper belt;
The other star must have a wide-orbit planet (> 100 au);
The planet must be captured onto an appropriate orbit to sculpt the orbital distribution of wide-orbit Solar System bodies.

So How likely is the Sun to have picked up Planet 9 in a flyby? Astronomers estimate the probability of a successful capture as 2%. So capture of a rogue Planet Nine is not impossible, but it’s not very likely. 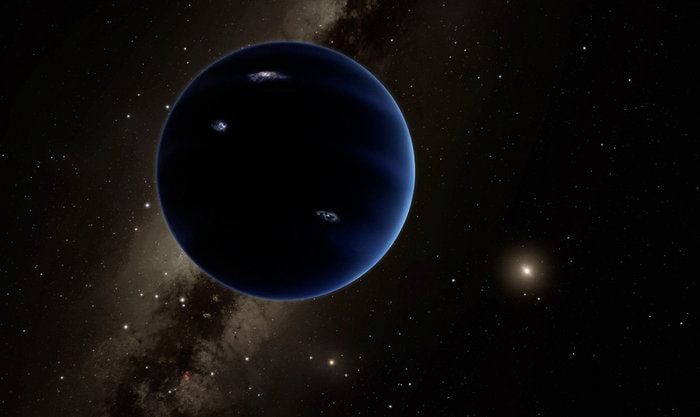 I’m very skeptical of this turning up because I’ve seen so many predictions like this—and so far they’ve never turned out,

But I’m sure that they ultimately will. I have no doubt that there are lots of planets out there.

So how could scientists find it for sure?

Go to a big telescope with a wide field of view, and look at as much sky as possible,

Take three images of the sky, with maybe 1.5-2 hours between each image, and look for things that move. Things that move fast are asteroids and are nearby, and things that are slower are farther out.

Planet Nine, if it’s there, will be a bit harder to find than Pluto. It will be dimmer and farther away, and scientists estimate that it takes between 10,000 and 20,000 years to orbit the sun once—so it will move very slowly across the sky.

But if Planet 9 should truly exist, the capture scenario would thus seem to predict a much larger population of bodies beyond Sedna and its ilk which is very exciting.

We need more mass in the outer solar system,

So it can either come from having more minor planets, and their self-gravity will do this to themselves naturally, or it could be in the form of one single massive planet — a Planet Nine. So it’s a really exciting time, and we’re going to discover one or the other.