NASA Probe may Offer Clues to How Mars Lost Its Atmosphere

A NASA spacecraft that recently arrived in orbit around Mars is already helping to solve a Martian mystery. Scientists are using the space agency’s Mars Atmosphere and Volatile Evolution (MAVEN) spacecraft to gather more data about how Mars’ atmosphere bled molecules out into space over time.

This new data reveals clues about how the solar wind penetrates deeper into Mars’ atmosphere than previously thought, causing the loss of atmosphere to space over time. The new information also shows the composition of the planet’s upper atmosphere, as well as its ionosphere. 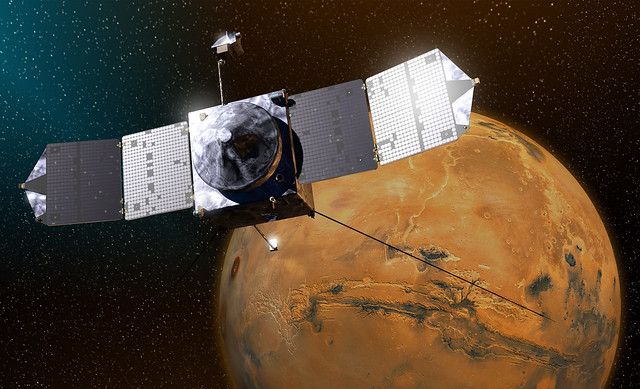 Each time it completes a full revolution around Mars’ orbit, MAVEN takes a dip inside Mars’ ionosphere – the layer of ions and electrons extending from about 75 to 300 miles above the surface which serves as a shield against solar radiation gusting from solar winds.

Here’s where the funny parts starts though. In theory, solar winds – hot, high-energy particles – should be deflected by the ionosphere, so you’d think you can only detect these in the upper atmosphere.

Considering MAVEN’s orbit, the probe’s instruments shouldn’t be able to pickup any charged particles when it dips through the ionosphere, but it has.

MAVEN’s Solar Wind Ion Analyzer found solar-wind particles that are not deflected but penetrate deep into Mars’ upper atmosphere and ionosphere. What happens, NASA scientists reckon, is upper atmosphere interactions transform the charged ions into a neutral form that can penetrate the ionosphere shield. Once there, the stream emerges in ion form again, in all its former glory, retaining all its solar wind characteristics.

Something fishy is definitely going on, and scientists believe this peculiar, Hudini-like mechanism makes it easier to link drivers of atmospheric loss directly to activity in the upper atmosphere and ionosphere.

“We are beginning to see the links in a chain that begins with solar-driven processes acting on gas in the upper atmosphere and leads to atmospheric loss,” said Bruce Jakosky, MAVEN principal investigator with the Laboratory for Atmospheric and Space Physics at the University of Colorado, Boulder. “Over the course of the full mission, we’ll be able to fill in this picture and really understand the processes by which the atmosphere changed over time.”

“As the first orbiter dedicated to studying Mars’ upper atmosphere, Maven will greatly improve our understanding of the history of the Martian atmosphere, how the climate has changed over time, and how that has influenced the evolution of the surface and the potential habitability of the planet,” says NASA Administrator Charles Bolden. “It also will better inform a future mission to send humans to the Red Planet in the 2030s.”