Milky Way could be 50% Bigger Than We Thought, A New Study Claims

The Milky Way Galaxy is huge with our small solar system acting as just a grain of sand of the giant beach that is the galaxy. NASA previously estimated that the galaxy spans approximately 100,000 light years across. With each light year representing about 6 trillion miles, we are talking about an almost unimaginable distance.

If you think that’s large, think again. According to a new study led by Yan Xu of Rensselaer Polytechnic Institute in Troy, NY, our Galaxy is at least 50 percent larger than is commonly estimated.

We know quite a lot about the Milky Way, so how can it be that we’re just now realizing that we were so wrong about its size? It turns out that what seemed to be concentric rings of stars surrounding our galaxy’s bulging center are instead concentric ripples–and that means the galaxy doesn’t end where we thought it did.

Scientist Yan Xu explains “We identified an asymmetry in disk stars that oscillates from the north to the south across the galactic plane in the anticenter direction,”.

“What we see now is that this apparent ring is actually a ripple in the disk. And it may well be that there are more ripples further out which we have not yet seen,” Xu said. 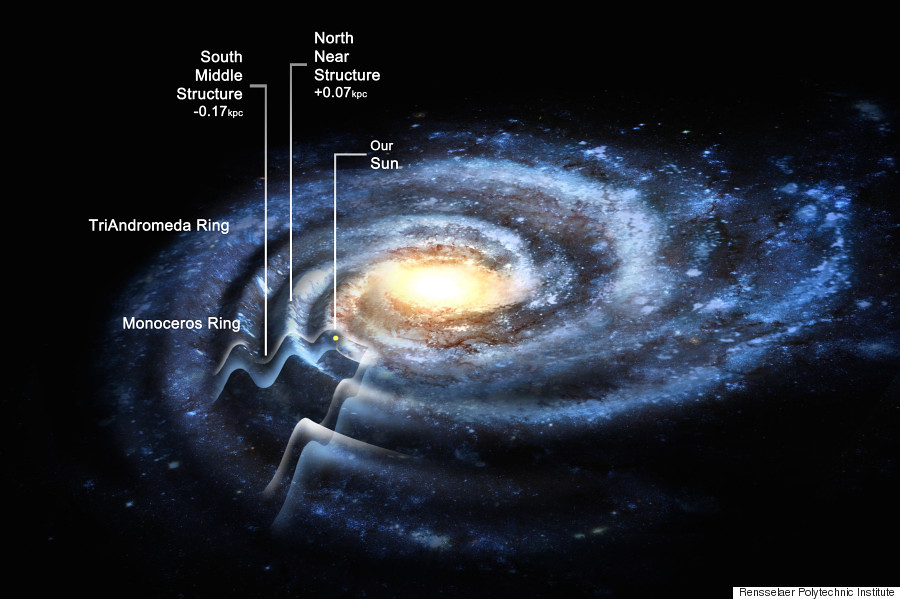 Illustration showing how regions of low density may actually be evidence of a corrugated structure.
Click to zoom

The new findings change our current understanding of the structure of the Milky Way. They reveal a galactic disc that is not stretched along a plane, but is contoured into concentric ripples with ridges and grooves. “As it radiates outward from the sun, we see at least four ripples in the disk of the Milky Way. While we can only look at part of the galaxy with this data, we assume that this pattern is going to be found throughout the disk,” Heidi Newberg from the Rensselaer Polytechnic Institute in New York said, in a statement.

“It’s very similar to what would happen if you throw a pebble into still water – the waves will radiate out from the point of impact,” said Newberg. “If a dwarf galaxy goes through the disk, it would gravitationally pull the disk up as it comes in, and pull the disk down as it goes through, and this will set up a wave pattern that propagates outward. If you view this in the context of other research that’s emerged in the past two to three years, you start to see a picture is forming.”

The astronomers are hoping that 3D, high-resolution images of the ring of stars could be helpful in revealing more details and concluding the size of the galaxy. Scientists are now planning to use Gaia telescope in Europe for further investigations. Along with examining the Monoceros Ring, they are also planning to analyze the stars beyond the Monoceros filament.