GJ 832: Fascinating Planetary System with An Earth Like Planet

At night, when you look at the stars and you wonder “is anybody out there?” just realize that someone out there could be looking back at you and wondering the same.

In our galaxy, there are at least 100 Billion exoplanets, planets beyond our solar system orbiting stars other than the sun. Many of them are located in the habitable zone — the right distance from a star where liquid water might pool on the planet’s surface. Studies shows that the Milky Way alone may host 60 billion alien planets located in the habitable zone, and this is just in our galaxy. The universe could be home to 100 billion to 200 billion galaxies, so you can do the math to see how many habitable alien planet are out there.

Right after we detected the first exoplanet back in 1995, we realize the importance of studying and monitoring these planets. The quest for other worlds like our Earth rise intense excitement and popular interest in the astronomy community and beyond. So, the challenge now is to find rocky planets in the habitable zone of their stars. To do this, NASA launched on March 6, 2009 the Kepler Mission, a space telescope designed to survey a portion of our region of the Milky Way galaxy to discover dozens of Earth-size planets. Excitement results came immediately, the Kepler Telescope found thousands of exoplanets, some of them are earth like planets. To date, Kepler detected more than 4500 candidates, with more than 1000 confirmed exoplanets, 12 of them are less than twice Earth-size located in the habitable zone…. and the numbers are increasing.

Determining whether these planets are habitable has become the new holy grail of astronomy,

The new-found abundance of planets, combined with the much larger range of inhabited terrestrial environments suggests that habitable planets are common. This increases the probability of finding some kind of extraterrestrial life.

On July last year, NASA and SETI announced the discovery of the most Earth-like exoplanet to date, Kepler-452b, the first almost-Earth-sized planet located in the habitable zone of a star very similar to our Sun. But the problem with this planet is that Kepler-452b lies 1,400 light-years away from us… it is so far, far beyond our reach and capabilities. Actually, its hard for us to study it in details and confirm for sure its habitability. But what about other possible exoplanets relatively close to us? The nearest terrestrial exoplanets is located 4.3 light years away in Alpha Centauri star system, our closest stellar neighbor, but recent studies show that these exoplanet orbits too close to the host star, so the habitability of this planet is almost null.

The next exoplanet is Kapteyn b with high chance to lies within the habitable zone, its 12.8 light years from the sun with a surface temperature of -25.15°C. But a study published in the Astrophysical Journal Letters on 11 May 2015 questioned planet’ existence, this super-Earth could turn out to be nothing more than a trick of starlight. 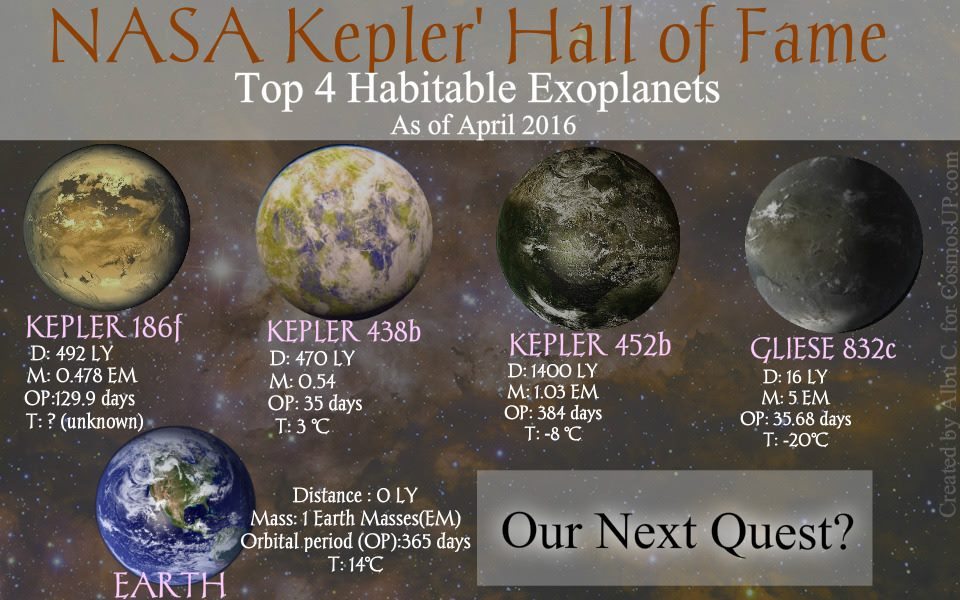 But our hopes aren’t dashed to the ground yet. The best close candidate lies 16 light years away in Gliese 832 star system. Incredible, a planet with a surface temperature of 22°C could reside there.

GJ 832 planetary system is a potentially multi-planet system which is currently known to host two planets, inner GJ 832c and outer GJ 832b, within 3.6 AU from the M dwarf star, and is located at a relatively close distance of 16.1 light years from the Earth.

GJ 832c, the inner planet, orbits its host star at a distance 0.16 AU away and is potentially a rocky planet with a mass ≥5.4 M (Earth masses). This planet is located in the inner boundary of the habitable zone. On the other hand, orbiting the same star, the distant planet GJ 832b, the outer planet, was discovered by Bailey in 2009; which is a long-period (∼3657 days) giant planet at 3.53 AU, with a mass of 0.64 M (Jupiter masses). Its orbit is well outside the habitable zone, and given its relative position and its mass, it can be assumed that it plays a role of the Jupiter in the Solar System of setting gravitational equilibrium in the system.

Recent discovery of exoplanets has shown that the multi-planetary systems in compact orbits seem common in our galaxy. For example, Kepler 186 is a five-planet system. Another such planetary system is Gliese 581 which is known to host three planets along with the two others that are not yet confirmed.

Not only Earth-size planets but also the existence of super-Earths in compact multiple systems are found to be more common. With an addition of the third planet in the Kepler 47 system, it became the first multi-planet circumbinary system and opened a new chapter for us to understand the planet formation processes and the dynamical compactness of the planetary orbits.

GJ 832 is a compact multi-planetary system like many others seen in the Milky Way. So, maybe its home to more than 2 planets… or not? In a new study, uploaded on arxiv servers, astronomers explore the case for the existence of a third exoplanet, an Earth-like world injected right between the two known planets.

Abstract Simulations Astronomers used a large number of parameters as the initial conditions that covers the whole phase-space of the existing bodies for starting their numerical simulations. The results? Signals suggest that an additional planet with a mass of (1M ≤ mass ≤ 15M) with dynamically stable configuration may be residing between 0.25 — 2.0 AU from the star. And there’s even more… The scenario shows that the Earth like planet could be a real Earth 2.0, even capable of hosting life. Isn’t this the holy grail of astronomy? Yes if scientists’ results are accurate 100%. But for now, the third’ planet existence is just theoretically possible.

It will be interesting to know if any additional objects in the Gliese 832 system follow this familiar Solar System configuration, but this architecture remains rare among the known exoplanet systems,

Author note: Planet Neptune was mathematically predicted by Urbain Le Verrier before it was directly observed. The telescopic observations confirming the existence of Neptune were made in 1846 by astronomer Johann Gottfried Galle. In these recent days, Planet Nine, a hypothetical large planet in the far outer Solar System is also predicted by models. So, a mathematical predication is not a satisfying answer but it is a possibility. Maybe there’s an amazing third planet with right conditions in GJ 832 System, or maybe not, in both cases its significantly thrilling!